During the CanSat operation, each team will get their CanSats launched up to an altitude of approximately 1 000 meter by a rocket. At this altitude the CanSats will be ejected from the rocket. During the descent, the CanSats will perform their missions and send data to the ground trough a radio transmitter. Each team normally consists of four students and one teacher.

In 2016 both the European and the Nordic CanSat competition will for the first time have a space theme to the competition. The theme will announced by ESA in the near future. Come back later to this page and see this page for more information 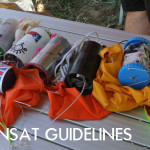 This page will go trough the details of the Nordic ESERO CanSat competition. What the mission is and the criteria/requirement for a successfull CanSat mission.